How a flu created a view

Somewhere in 2011 during a course in street photography the assignment was clear: take your camera and picture daily life in your own street. Not the most inspiring thought, but I got the message: open your eyes for the world directly around you. So, on an autumn Sunday I went out with my eyes wide open. For more than an hour I walked through my street, but nothing happened. Pretty depressing and it must have been a pitiful sight to see me walking in my own street making pictures of, well, absolutely nothing. The result was a rather boring and depressing view of my street. However realistic the end result was. But I did the assignment, but one thing was clear to me: this is not a photo genetic street. 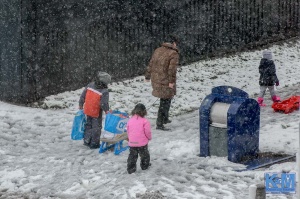 In February 2012 I had to stay inside because of a unpleasant flu. I don’t know if there is any pleasant flu, but this one was definitely unpleasant. Once I felt slightly better the Winter came in. Snowstorms and below zero temperatures. A rare occasion, as Dutch winters are normally autumn-like. In my comfortable and warm room I enjoyed seeing people struggling against the elements. Why not take some pictures? And the rest is history, so they say 😉 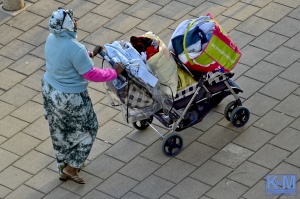 The original idea was to continue shooting during that rare spell of very cold weather. The thought to do this for the coming five years never struck my mind. Memories of that autumn Sunday in 2011 very still too vivid. However, I had been thinking about a documentary on daily life for some time. Walking the streets of nearby Rotterdam was an option, but far from original. More or less every major city has its own street photographer.

Beautiful examples came from India with striking images of daily life. But once I started thinking about this clinically I came to the conclusion that it must be extremely difficult NOT to shoot striking images in India. So, why not try the exact opposite and make my own street a kind of “little India”. In one of the less attractive parts of the Netherlands, a residential area in the city of Spijkenisse. 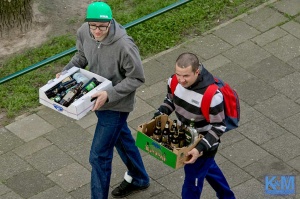 “Finding the extraordinary in the ordinary” became my photographic red line. You really don’t have to fly to the other side of the world for extraordinary moments. It also happens right by your doorstep, as long as you really open your eyes to the world around you. Years later I spoke with my aunt about this project. She wasn’t surprised at all that I was doing this. “When you were some three years old you were already watching the world outside. ‘The fat guy is leaving’, ’the milkman is coming’, ‘it is snowing’. And you immediately had to tell all this to the world around you.” Well, in a sense I haven’t changed much since. I don’t know whether this is a positive sign or not 😉 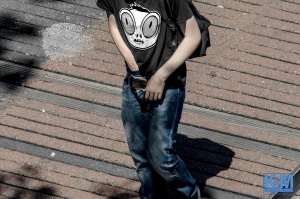 The title of the project, A view from the room, is something that came to mind on more or less the first day. Apart from the fact that I thought it sounded nice, it was also a slightly confusion cocktail of E.M. Foster’s A Room with a View, the Kim Wilde song View from a Bridge and the Leonard Cohen album Songs from a Room. To make things even more confusing it was also based on an obscure song from the Seventies by Deco, who covered a Noel Coward song, called A Room with a View, with the closing lines: We’ll watch the whole world pass before us while we are sitting still. Leaning on our own window sill . Well, that was a clear explanation, wasn’t it? 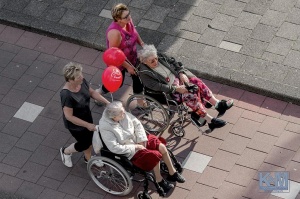 What is the secret behind my own version of A View from the Room? I think this is partly thanks to its location. Close by there are schools and a small shopping centre. They are attracting all sorts of people, regardless of their background, income, age, gender, etc. You have to cross my bridge in order to reach your destination. The bridge works like a kind of aorta for my street and therefore my pictures.

Get ready for a pretentious description of the project: It’s a kind of cultural anthropological photography on a journalistic geo-informative basis. Let those words sink in, and maybe in the end you say: “it sounds pathetic, but in a sense he is right”. Have a look a the photos and what do you see? The young, the old, locals, migrants, men, women, animals, wheelchairs, cyclists, walkers, workers, snow, sun, rain, storm, joy, anger, different kinds of clothes, smart phones, head phones, skate boards and so on. 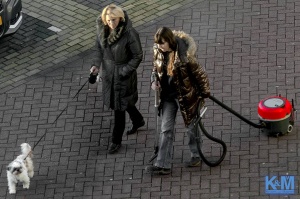 Most of the pictures on this site have been published before, mainly on Flickr. All of them are called after the project. At the start I thought about giving each picture each own title or explanation to add some context. I decided not to do that as it doesn’t leave any room for viewers to create their own story. It can be surprising what people sometimes see in one picture. I will never contradict them or tell them what is really happening. It is their interpretation and that’s fine. Sometimes they ask if someone got hurt and I will tell them that wasn’t the case. Even though I want to show daily life in its purest form, I always want to create a little smile on the viewer’s face. 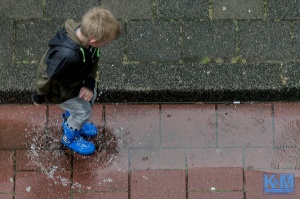 This doesn’t mean there are moments when I decide not to press the button of the camera. Such moments are when people are in tears or when it’s too easy to make fun of people. Special attention is always needed for children. Because of their spontaneous and unpredictable behaviour they are great to capture on camera. Sometimes I delete a picture as I think an image can be misused by sick minds. The last thing I want is to my pictures being published on dubious sites. Not so much for me, but more for the children in the picture. 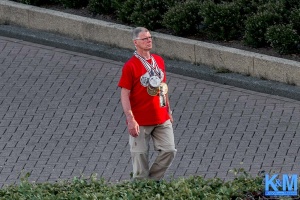 During the last couple years I tried to find out if there were similar projects, somewhere in the world. Strangely enough I couldn’t find any. Closest came a project from South Korea in which a photographer followed daily life in his street. But that was ‘only’ for one single year. So, I can state in all modesty that this ‘A View from the Room’ is unique, as long as there is no prove to state otherwise ;-). 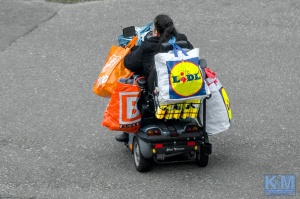 And where does this leave the other half of Kroon en Van Maanen Photography? Well, Anat Kroon has a view from her room which is boring, taken from a photographic viewpoint. She is living in a dead end street. Every half an hour or so someone passes by to do some shopping. This means that a little later that same person will cross my bridge, as one of the many others doing this very ordinary thing, day in day out. Extraordinary, isn’t it? 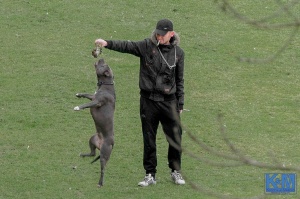